How I Photograph the Pennsylvania Elk is a book I wrote to share my methods of how I photograph the beautiful Pennsylvania Elk. I don’t pretend to be an expert on the subject; I just wanted to share with others what works for me. I am blessed to have incredible mentors who shared with me and now I am sharing my photography passion in return.

Over the past 22 years I have spent time walking through the hills of Elk County near Benezette, PA. I own some property up on Winslow Hill and thoroughly enjoy every minute I get to spend up there! My photo passion has increased greatly over the last four years and some of my photographs appeared in a few newspapers and the Pennsylvania Game News. I also have postcards, matted prints, photo buttons, and printed copies of my book available for sale at the Elk Country Visitor Center.

Wildlife photography is like nothing else in the world to me and I can’t wait to be out in nature trying to capture the beauty of God’s incredible creation! In this book I share some of my favorite methods of finding the elk. Then I share some techniques to make quality photographs. I also go through the seasons of the elk and talk about how to brave the elements when photographing them. Photo equipment is mentioned, too. My favorite chapter is “Don’t Just Shoot the Bull,” and encourages the photographer to aim the camera toward the cows, calves, and spikes, too!

The new eBook version can be uploaded to an iPad, and iPhone, or your computer.

Check it out here: How I Photograph the Pennsylvania Elk 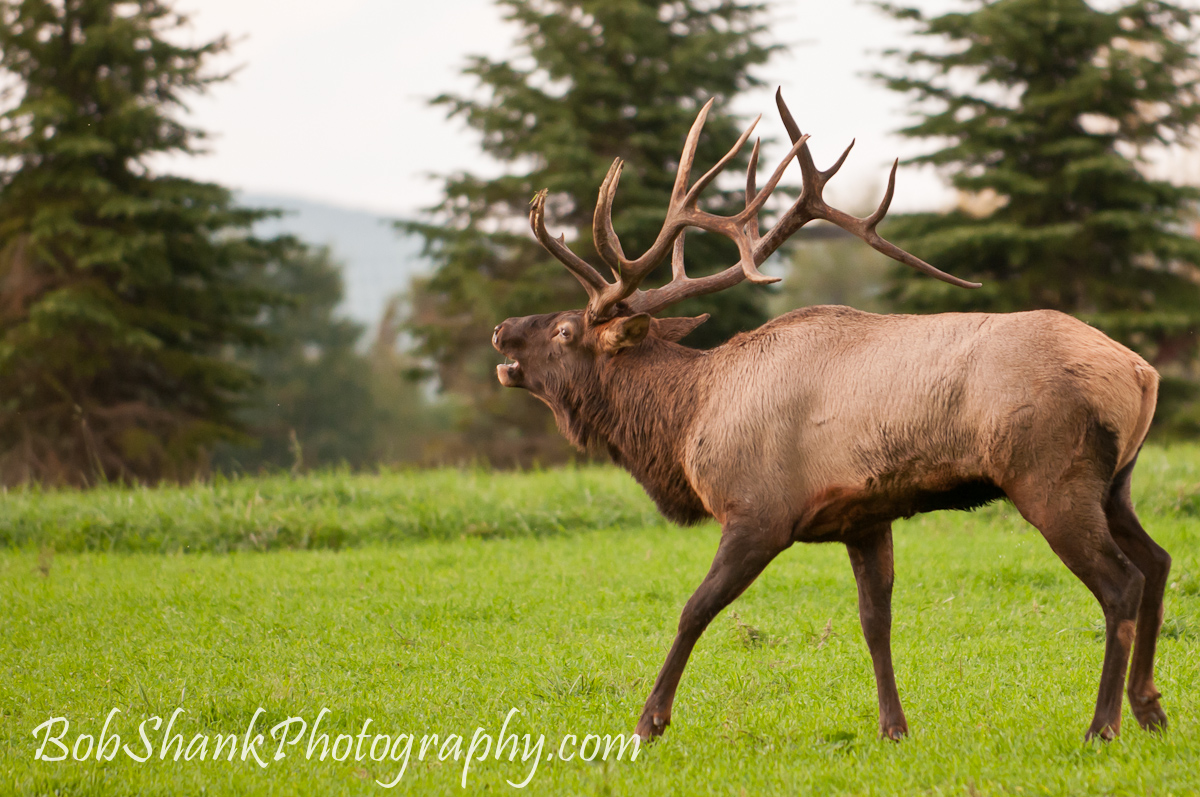 You cannot see it in this photograph, but there is an entire field of cows very close to this bull. The problem for this bull is that none of the cows are ready to mate. So, this bull is frustrated.

I’ve watched bulls in the rut for many years now and there is a pattern which repeats itself over and over. A bull will follow a cow, sniffing to see if she is in heat. Typically the cow will trot or run away. This leaves the bull frustrated and almost every single time he will bugle at this exact moment. This is the time to be ready with your camera, which is exactly what I did here in this photograph.

Watching and observing animals is not only enjoyable, it can teach you to be prepared for the best photographic moment!

Capturing a classic battle like this with a camera often is frustrating to me. I never seem to be at the right place at the right time. Or the light is fading too quickly, or the fog is too thick for a good photograph. These fight scenes seem to be elusive to me, which can be very frustrating at times.

This photo captures some of the energy in this fight. It all started, as usual, with much posturing from each bull. This is typical and I could just tell that these two bulls were going to go at it. Then, in an instant, they ran toward each other and crashed their antlers together with an ear-piercing jolt! This is what the fall elk rut is all about!

I like the way these two bulls are working hard to dominate the other. I also really like the dirt flying in the air, both between their antlers and behind the right bull’s hind feet. This helps to portray the massive power and energy present in a real honest-to-goodness fight between two mature bulls. Many elk viewers think they are witnessing a fight when in reality they are simply witnessing what is called sparring, which is much tamer and mild compared to a full-blown fight. A lot of us think these fights last longer than they actually do, too. I went back and looked at the metadata from my photographs to determine the starting and ending time of this fight. It only lasted 2 minutes and 20 seconds. This might not seem long to us, but I’m guessing it seems like an eternity for these two bulls!

The one problem with photographing this bull-fight was that we were losing light in a hurry. I had to bump up the ISO to 800 on my D300. I am finding that I do get some decent photographs with this setting and the noise is at a reasonable level, which is good. Then use the noise reduction feature in Lightroom to clean it up. The newer cameras and software have come a long way in recent years in dealing with noise. I found out this week that I can get usable photographs even at an ISO setting of 1600.

This was the only real fight I witnessed this and it was a powerful one. I hope my photographs do a reasonably decent job of portraying the fierce energy present in these fights between two bulls. It sure is something to see!