Yesterday I shared the story of how my son, James, and I encounter a cow elk and were able to photograph it close up.

Today I am posting three more photos of this cow. Yesterday’s photos included much of the vegetation that the cow was actually eating. These photos today try to focus on the cow and highlight her without much distraction. Wildlife photography is difficult for many reasons: long, fast glass is needed and it’s expensive, animals are difficult to find and often don’t stay still very long, the best times for wildlife photography is at sunrise and sunset when light is low, and it is often hard to separate the subject from its camouflaged background. This last difficulty is my subject today.

How does the wildlife photographer separate the wild subject from its background? What tools in our camera can we use to assist in this endeavor?

Wide open f-stops are probably one of my most favorite tools to help accomplish this goal. Shooting wide open blurs the background and allows the viewer’s eye to focus completely on the subject. Large f-stops like f/2.8 are extremely helpful. Yes, they are expensive, but I find them irreplaceable in my wildlife photography. Another tool is the placement of the subject. We all know that backgrounds can literally ruin a photograph. So working with a clean background is very helpful. Setting the subject against a clear blue sky is golden! Or how about using the contrast of goldenrod or queen anne’s lace in a field to place your subject? Of course we do not literally place our subjects, but paying attention to the background can make a subject stand out loud and proud!

What tools do you use to separate your wildlife subjects from their habitat?

Last week while photographing the elk of Pennsylvania, my son and I also saw lots of whitetail deer. In fact, I do not remember ever in my life seeing so many fawns in two days time! We saw 18 fawns in two days. Incredible!

It never ceases to amaze me what we see in the wild. We usually do see the elk. I can’t remember a time when we were last skunked–meaning we didn’t any elk whatsoever. Sometimes when you go out to shoot some specific animal, you don’t see that specific animal but are blessed with sightings and photographic opportunities with other animals. Staying patient certainly has its benefits!

We were out to photograph the elk of PA and we did see elk again, but we also came across these whitetail deer. So I thought I would post these photos today. Whitetail deer in Pennsylvania are very difficult to photograph. I have goals to get better photos in the future, but at least I have a decent start with these incredible animals. I love spending time in the wild because you just never know what you might see and get to photograph!

My good friend and hunting buddy, Randy Greenly, teases me that sometimes I sound like a broken record. You see, if I said it once, I’ve said it hundreds of times: “There’s no place like the mountains!”

I believe this to be absolutely true, too. Last week my son, James, and I were able to get away for two days to our special place in the mountains of Elk County. We left immediately after his baseball practice on Thursday evening because we wanted to stop at Cabelas in Hamburg, PA before they closed. We got there 15 minutes before closing. The greeter who met us at the door even asked, “You do know you only have 15 minutes, right?” Yeah, 15 minutes isn’t much time at all for two outdoor enthusiasts to spend in a store like Cabelas! But we got what we wanted and were on our way to the mountains.

James and I both enjoy seeing the majestic elk of Pennsylvania and photographing them. We learn more and more about them all the time, too! The bull elk are currently in velvet, which means that their antlers are encased in a blood-rich covering that provides antler growth. Soon they will rub this away to get ready for the fall rut, which is my absolute most favorite time of the year to be in the outdoors with the elk. Hearing a bugling bull elk and watching two bulls stand each other off in a field are just of the impressive sightings I’ve experienced in the fall. It is awesome and there is nothing like it!

The weather last week was not very good, nor was it conducive to photography early in the morning or late in the day. The cloud cover and rain shortened the shooting time for us photographers, so I did not capture as many quality photos as normal. I do hope some of the following photographs do share my sentiment–that there is no place like the mountains! 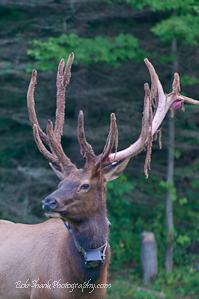 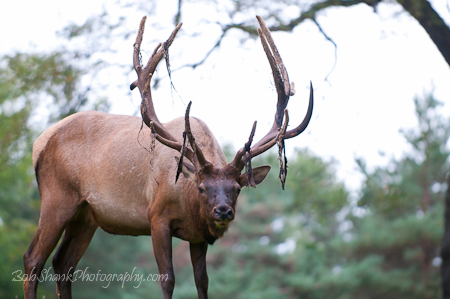 My son, James, and I just watched Dances with Wolves tonight. This is one of my all-time favorite movies. It has been quite a long time since I had seen this movie and my hadn’t seen it before tonight. As we watched the movie we experienced a variety of emotions: happiness, anger, empathy, and great sadness. Obviously this movie was successful in stirring up all kinds of emotions.

Shouldn’t our photographs do the same? We take photos all the time and we attempt to capture incredible moments that tell a story. After all, the old saying is, “A picture is worth a thousand words.”

If this is true, then we owe it to ourselves and to those who view our photographs to make sure that we capture and even evoke emotion with our photos. You can view a hundred photos, most of which appear ordinary and flat; but when you find that one photo that expresses emotion you immediately know it.

So, are you attempting just to capture colorful subjects or are you willing to create photographs that evoke emotion?

My son, James Shank, is becoming quite proficient behind a camera. He has his own Nikon D40 and enjoys going out with me on all kinds of photographic excursions. He thoroughly enjoys photographing the elk of Pennsylvania and lately we have been working on some winter landscapes. You can some of his photos here on his gallery. I think you will enjoy his creative technique!

Yesterday, my good friend, Dick McCreight, and I journeyed to the Upper Delaware National Park to try to find some bald eagles. The eagles winter in this park, which follows the Delaware River on the state line between Pennsylvania and New York. We did manage to see one bald eagle, but in my excitement I was not able to capture even one shot! This was a humble reminder to me that one can never be prepared enough. It was my lack of preparedness which resulted in me coming home empty-handed. We did manage to see some snow geese and a few turkeys as well.

My new Nikon D300 is performing beautifully. I created 3 custom banks of menu settings so I can quickly change to specific shooting conditions. The camera is solidly built and is user friendly in so many ways. The bigger LCD screen makes setting the menus and looking at the photos much easier. The menus make sense are easily navigated. And the buttons and knobs on the camera make for quick changes as shooting conditions warrant. I am extremely impressed with the D300 so far and I am sure this camera body will suit my needs perfectly.