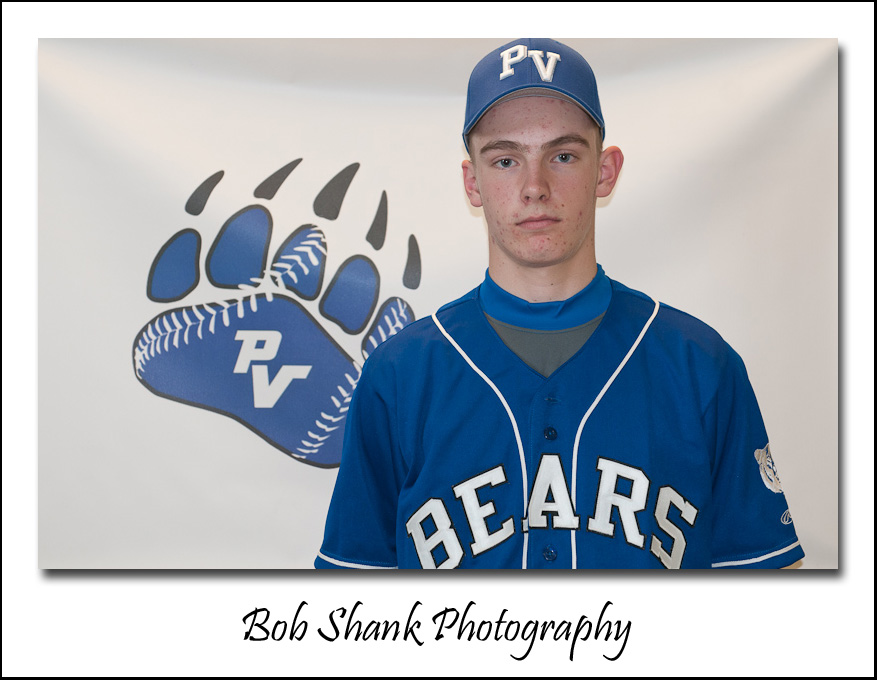 The weather is breaking into spring-like weather and the baseball season will soon be under way!

Yesterday I spent the morning photographing the player portraits for their yearly program. It is always fun to be around the players to sense and hear their excitement and witness their enthusiasm on the brink of a new baseball season. This was one day after try-outs were finished so there was a sense of relief in the air but also a real sense of anticipation as well. These boys are ready to put their game on the field!

On a personal note, our son James made the varsity team as a sophomore and we couldn’t be more proud of him! The above photo is James posing for his player profile, which will appear in the baseball program that will be handed out this season.Isn’t that quite a game-face?

Behind the Scenes on this Photo Shoot

This year instead of a basic, boring background like a brick wall, I used the team’s newly created logo and made a design to serve as a backdrop to the player profile photos. A few setup steps in Photoshop and the banners were off to the printer to come out as durable vinyl banners. When it arrived I inserted metal grommets into each corner so I could then attach the banner to my two backdrop stands. I set this up in the locker room, which served as my studio for this shoot. The boys were getting their uniforms for the season, which made this a convenient time for the photos to be taken.

I also set up my main light source off to the side of this backdrop at about a 40-degree angle and up high. My SB-900 speedlight was used remotely and I attached it behind an Ezybox to disperse the light over the subjects. This softens the light in a pleasing manner and avoids any hotspots in the photos. I also attached the dome diffuser to further diffuse the light. One test shot and I was ready to go! I really enjoy using Nikon’s off-camera flash setup. It’s quick, easy, and very effective!

Once back in my office, it was time to edit the photo shoot. First, I examined each player’s photos and used Lightroom’s Survey View to quickly narrow down the options and pick the best photo. This was repeated for each player on the Varsity and then the Junior Varsity team. Next it was time to do a few adjustments to the photos. I started on the first photo and then synched these edits across the entire collection to apply them to the rest of the photos. Since my setup was controlled and consistent, my sync was also consistent. I like Lightroom for this kind of process, too!

Finally, I renamed each photograph with the name and number of each player. This will help the layout guys when assembling the baseball program for printing. Now I am sending all the files to a DVD to send in to the school tomorrow.

It’s been a busy weekend but it was fun! The photo shoot went well and I am pleased with the results. I hope the players and their families agree!

This past Friday I drove to Norfolk, Virginia to pick up my son from Sea Cadets Boot Camp. He was there for the past two weeks so I was there to attend his graduation and pick him up. He also wanted to tour the USS Wisconsin afterward.

I gladly attended his graduation ceremony but was not nearly early enough for my liking. I usually like to get to an event with plenty of time to spare so I can check out the best photo shooting angles, the lighting, check out any obstacles, and more. Well, the graduation ceremony location changed due to impending bad weather and heavy traffic were both reasons to delay my early arrival. I think I arrived about 15 minutes before the scheduled ceremony began.

I was given a program as I entered the facility, which was actually a hangar and now a makeshift graduation hall. I looked for my son’s name to figure out which company he was in so I could be close to him. I eventually found his name on the very back page and noted that he had some fancy brackets around his name. This indicated to me that he might be receiving some kind of award or recognition, so I positioned myself up near the side/front of the room to get a shot of his face if this actually happened.

The ceremony started. It was difficult to hear the speakers because sound doesn’t travel well in a hangar. A few cadets received awards and then the biggest, most prestigious award was being announced. It was the Battalion Honor Cadet Award, which is awarded to the most impressive cadet who is a cut above the others–above over 170 cadets in this particular case. They announced the recipient and sure enough it was our son, James Shank!

This proud papa kept his composure and shot away with the Nikon D300. I was equipped with a 24-70mm f/2.8 lens and a SB-900 speedlight. Here are two photos I snapped as James received his award and then was later marching with his company.

James checked out of his barracks, we grabbed a quick snack at a convenient store and headed over the USS Wisconsin. This battleship has a gloried history and is now open for topside tours. We had purchased our tickets online days before I departed for this trip to be sure we had a spot on a tour this specific day. The tour was led by a veteran who served on another Iowa-Class destroyer. He was fabulous and we learned a whole lot of details about this ship and how it was equipped for battle over the passing years. This ship saw active duty in World War 2, Korea, and the Persian Gulf!

Here are two photos I took on the deck of the USS Wisconsin, an amazing battleship with an impressive record of service.

The events of this day reminded me that you just never know what’s going to happen or what you might see, so have your camera ready at all times. I had hoped for better preparation and an earlier arrival, but all in all it wasn’t a bad day!

Many of us photographers like using rechargeable batteries. I remembering doing a post here on my blog a while ago where I bragged about the 15-Minute AA Energizer Charger. It works great and I highly recommend it. But I have a problem. I have the Nikon MB-D10 Vertical Grip which stores 8 AA batteries and the Nikon SB-900 Speedlight which holds 4 AA batteries. So to have enough backup batteries I need a total of 24 batteries. That’s a lot of batteries!

Now 12 of these batteries, half of the total number, are housed in each accessory. But that still means I need to store 12 charged batteries for when the ones in use get low.

What is the best way to store batteries until they are ready to use? Just put a rubber band around sets of four? Put them in your pocket until it’s time to make the switch? Make your assistant hold them since they need to earn their money anyhow?

How do you store your batteries?

I am learning more about speedlights and how to use flash not just indoors but also outdoors as well. Photographers need to control the light. On a bright, sunny day we need to use a small aperture or perhaps even a neutral density filter. Controlling the light is mandatory for a properly exposed photo.

The necessity of using a flash unit indoors is pretty obvious, but taking the flash off the camera and firing it remotely might not be as obvious. Moving the light around can create different affects and outcomes. Give it a try. Many of today’s speedlights can be triggered remotely via infrared.

Also when you are outdoors remember that a flash can fill in the dark side of  your subject beautifully.

Remember to control the light and your photos will look much better!