The colors are not nearly as brilliant as they were a month ago, but capturing a bull in the late fall in its natural setting is still worth capturing. Some photographers limit their outings to the fall rut when the elk activity is at its peak. This is understandable, but there is not a bad time throughout the entire year that is not worth the effort to be out photographing the Pennsylvania elk. 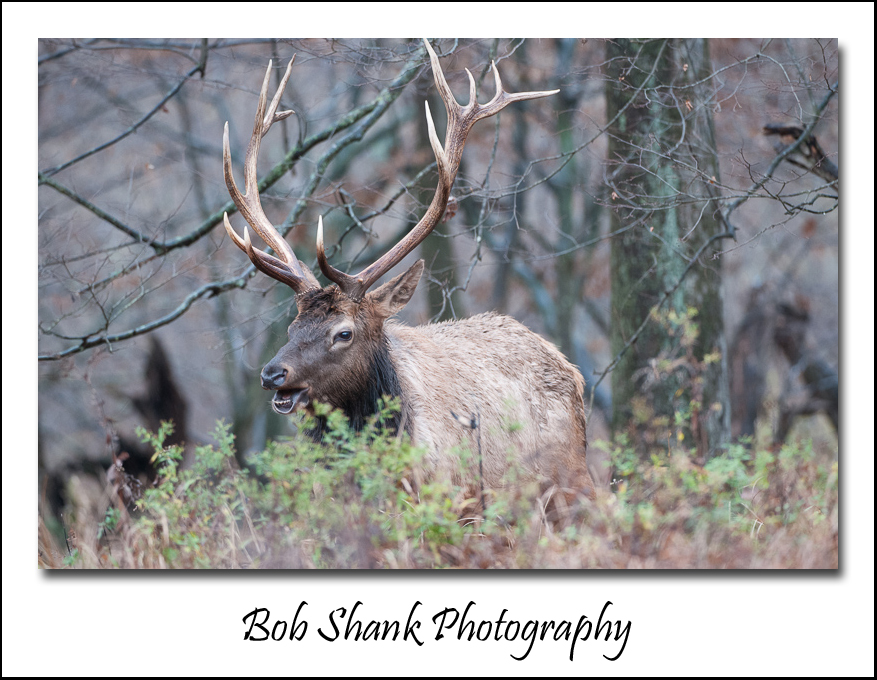 This is true for any photo subject. The best way to get better is to be out photographing your favorite subjects as much as possible. Cal Ripken, Jr. says this: “Perfect practice makes practice.” His theory reflects that it is not just practice, but perfect practice that helps us get better. This is true in baseball as well as in wildlife photography. One problem is that we can tend to crawl up beside a warm, comfy wood stove as the days get shorter. This is a mistake for any serious photographer, especially wildlife photographers. The sun sets differently in the late fall and winter sky than it does in the summer, which creates a different sunset to capture with our cameras. As a matter of fact, I was standing out in a misty rain with my long johns on during this particular photo shoot. 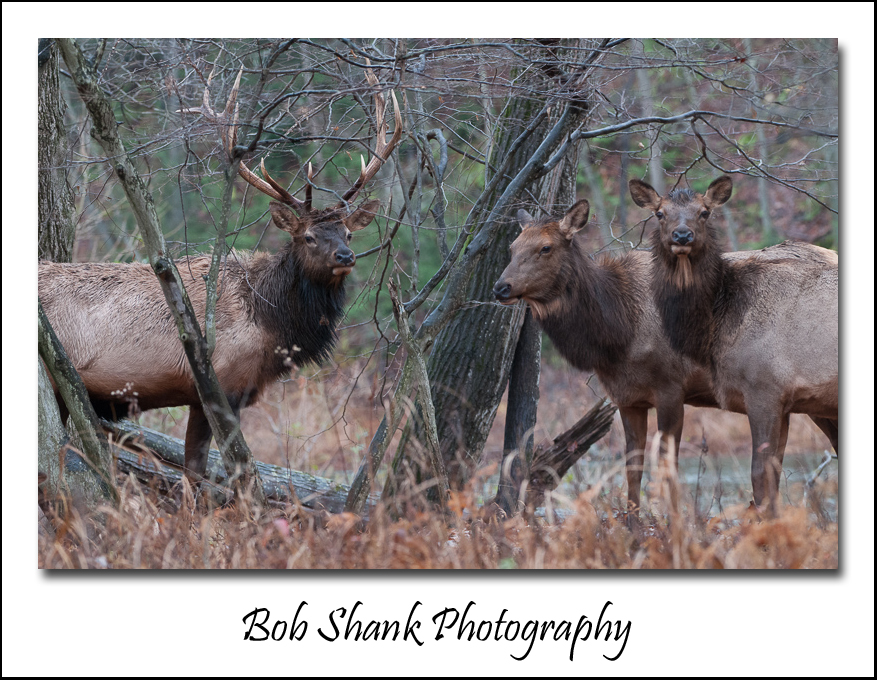 The late fall sees the elk habits change, too. Sure, a few bulls are still anxious to breed a cow, but now things are slowing down and the elk are thinking more about putting on weight to endure the upcoming winter. They gain weight by eating, so the photographer has to be patient, waiting for an elk to look up from eating. Patience is a virtue and this is no more true anywhere than with wildlife photography! 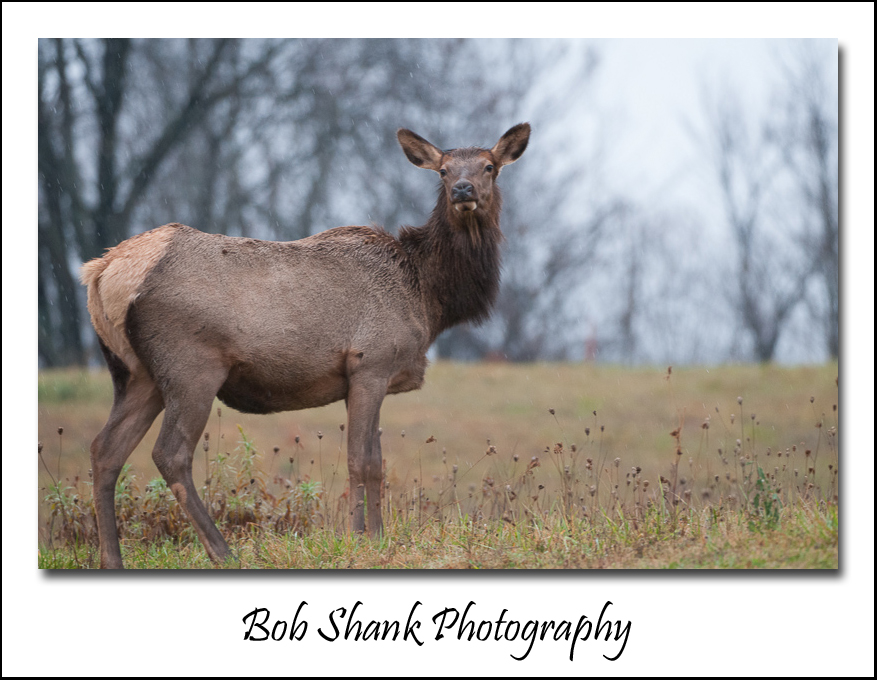 So, put on some warm clothes, grab your camera gear, and venture out into the wild this late fall season. When you come back into the warmth of your home or cabin, you will be glad you braved the elements to photograph wildlife. After all, to be a good wildlife photographer we have to spend more time in their habitat throughout the whole year!

Wildlife photography is a passion of mine for many reasons. The challenge of photographing an animal in the wild in its very own habitat is something that most people just don’t have the patience for these days. Spending time in the outdoors in nature and observing the animals in their natural surroundings is awesome. Time just spent on the top of a mountain even on slow days is better than the rat race most of us are involved with these days. I like to say, “There is no place like the mountains!”

These and many more reasons keep me excited and motivated to be out photographing wildlife. But two weeks ago was a poignant example of another good reason to be involved with wildlife photography: the connections we make with other photographers.

Our first night up on the elk range we were photographing a small herd of elk at dusk. We had just seen 4 bear, some turkey, a few deer, and a hawk. The action was fast and furious at times. Elk sightings were slow, however, until we saw this small herd of cows and calves. We photographed until we ran out of light and then we got to meet Brad Myers and his son Shane. We talked about our passion for photography and I enjoyed comparing notes with two other serious wildlife photographers. Little did I know how connected we would be later in the week.

Thursday morning, August 20th was the day the bull elk got caught up in the swing set. Brad and Shane were the first ones on the scene and reported the incident to the Game Commission. We joined them, set up our tripods and captured many photographs of the elk rescue. When the excitement was over we continued to talk and it was obvious to me that these two fellow wildlife photographers knew their stuff. I count it a pure honor and privilige to have met these two guys.

That morning Willard Hill was also there videotaping the rescue. I had emailed Willard earlier in the year, thanking him for producing the 2-part DVD entitled, “The Truth About Pennsylvania’s Elk Herd.” I had the opportunity now to meet Willard in person. The next day my son and I ran into Willard again as we were photographing some elk and we talked for a long time. It was my pleasure to meet Willard in person and hear some of his perspectives on the elk herd and talk about wildlife photography with him.

Friends in our lives sometimes come and go. Recently I re-connected with my best friend from back in my school days. I hadn’t talked with him in about 23 years. It has been so much fun to re-connect with him, catch up, and chat about old times. These friendships need to be valued and nurtured.

There is one example of this that stands out in my mind. Several years ago I was waiting at the edge of my favorite spot by a field when I heard some people coming. My first thought was, “Oh  no, I’m not alone anymore.” I heard a voice politely asking me if it was okay for them to join me. I said, “Sure.” Then I realized that one of the gentleman was a man I knew and he introduced me to Leonard Rue III, and his son Len, Jr. There I was, quietly waiting alone for the elk to appear in the field but now found myself in the presence of two of the most published wildlife photographers in the world! I sat there for the next three hours hearing one incredible story after another. Leonard and his son were two of the nicest and most down-to-earth people I had ever met. They shared their passion for photography with me and answered every question I asked.

Some nights when I am waiting for the elk or deer to appear, my mind drifts back to that night. I then I secretly hope that I won’t be all alone there on the mountain much longer. The connections we make in wildlife photography are surely to be treasured!