Getting exposure right in the camera is important to me. I aim to get the best exposed photograph on site rather than just grabbing a shot willy nilly and then correcting it in software. I suppose this goes back to my film days when capturing the correct exposure was absolutely necessary with the camera. Sometimes I miss those days, but that’s another story for another time.

Capturing the correct exposure not only makes our work easier in post-processing, but it shows that we know how to use our camera, too. Some photographers are so good at seeing the light that they can predict with incredible accuracy which f-stop and shutter speed to use! I am not that good most of the time, but I do know how to use my cameras exposure meter to get it right. Still, there are times when proper exposure is not so cut and dry or as easy as we’d like to make it.

Take for example this photo of a bull elk I captured on a recent trip to Elk County. It was a rainy morning and my main focus was photographing the elk of Pennsylvania. I didn’t notice it until I got home, but this shot showed the drops of rain on the trees in an incredible way. The droplets of rain which formed on the end of the branches produced  a spectacle of light behind the bull elk. It was neat!

However, the elk was took dark. When I slightly corrected the exposure the bull looked better but it appeared to me that the droplets of rain were not as clear or pronounced. I guess it may be because the main subject now properly exposed caused the whole photograph to be somewhat lighter. This appeared to shift the focus of the photograph off the droplets of rain and onto the bull elk. This is normally exactly what I want since I am a wildlife photographer, but I was torn on this image because of the change in look it created. Perhaps the proper exposure does depend on what we want the main subject to be in an image. Here the two different exposures of this photo. Which one do you like best? 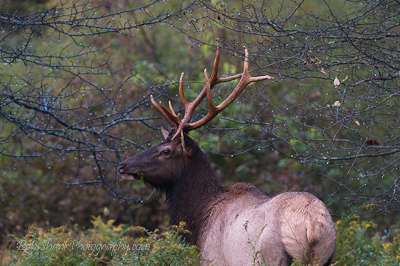 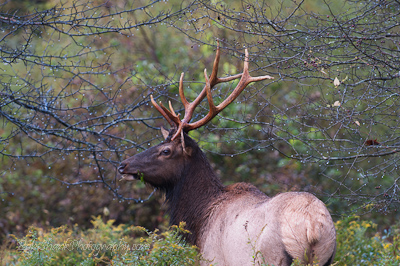