I just went through all my birds in flight photographs from my trip to Chincoteague in January. Sadly, not many of those photos are worth much. Capturing birds in flight is not easy. So many things can go wrong: focus, light or lack of light, sun glare, obstructions, and much more!

I was using my 70-200mm f/2.8 lens so I was not able to reach out far enough and the low number of good, quality images captured proved to me just has challenging this specific type of photography is to do.

It was fun to try though and I learned a lot. Admittedly, I probably learned more of what not to do rather than what to do, but even this is good education for the future! I believe the challenge is part of the lure in just about anything. After all, if it was easy then everyone would do it. Where’s the challenge in that?

Anticipation and preparation are obviously key. Being ready, as in just about anything related to wildlife photography is paramount. Some of these birds caught me off guard when they lifted up into the air, so capturing sharp photos was no where in the realm of possibility. Eventually, I learned to be a little better prepared and ready for a bird taking flight.

I usually like the deep blue sky backgrounds in my birds in flight photos, but paying attention to other objects can create visual diversity for the viewer of your photos. We certainly do not want all our photos to look exactly the same! Visual balance and diversity are important in any portfolio.

I couldn’t help but go back to see how I did with birds in flight last year at Merkle Wildlife Sanctuary. That trip left a lasting impression on me because it was the first time I captured decent photos of an osprey–actually an osprey and two juveniles. They were a whole lot of fun to photograph and eventually the momma bird lifted off in search of food. Again, having a longer lens would have been very helpful, especially when she was skimming the water to catch fish. But I did capture several of her in-flight and this is one of them. Have you been successful at capturing birds in flight? Give it a try. It’s definitely worth the challenge and it’s a whole lot of fun!

My time spent at Merkle Wildlife Sanctuary in Maryland was well worth the time and effort. I had a blast, saw and photographed a lot, and will try to get back there again. It was very hot but wildlife sights and sounds were abundant!

My research on Ospreys taught me that most of their diet is fish. In fact, about 99% of their diet is fish. The parents fish by flying high in the air to spot a likely meal and then dive bomb the water to snatch the prey with their long talons. They will then turn the fish head first so they are more aerodynamic when they fly back to the nest. An average of three eggs are laid each year and both the female and the male are involved in keeping the eggs warm until they are hatched. The nest I photographed the most this week contained two juveniles and they looked hungry most of the time!

I was able to capture some decent photographs of this Osprey family and some of the flying action of the mother on her flights to find fish. In the last photograph you can see the mother and her two hungry young chicks. 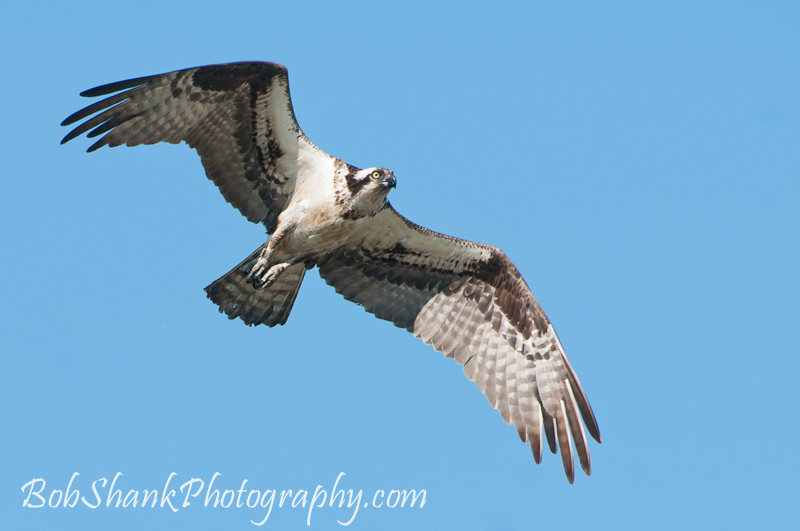 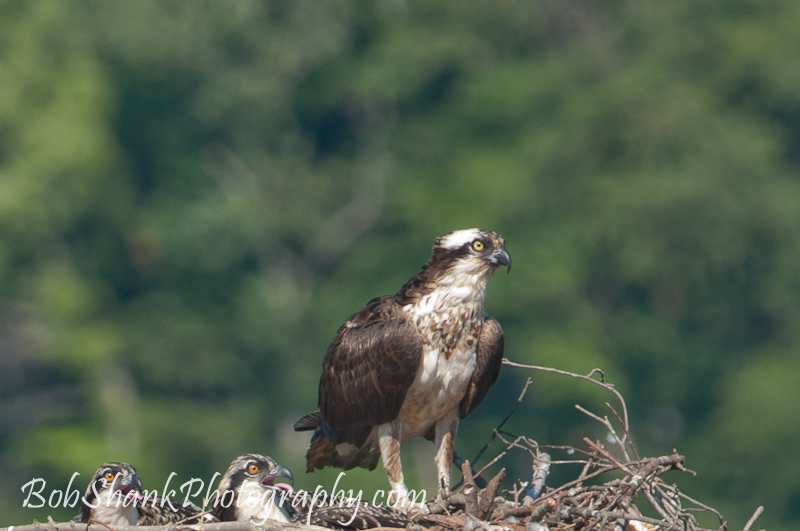